You feel an uncontrollable desire surging inside of you and ask your therapist for advice, but the answer is quite simple:

You need to DESTROY!

You are Laser Lizard, spread panic though the streets, smash buildings and burn everything you see. Not even the army can stop you.

* Sadly the WebGL support for mobile is still somewhat limited, but on most recent smartphones the game should work well.

Laser Lizard also supports touchscreen, if you are on mobile you should see virtual buttons with the same layout as the gamepads.

this game is so fun and everything looks so cool!!!

I saw a lot of Rampage influence in this game. I really enjoyed what I saw, and it would be great if it expanded into a full game. Congratulations on your game.

Cool game. Reminds of the one of my favorite arcade games from the 1980's, Rampage.

we have many plans and many features that we want to add but we all work full-time, we love game dev but we don't have much time for it

thank you for playing!

Yooooo!!! Why did it take me so long to find this hidden gem, EPIC.

The intro is hilarious, but at the same time, make the monster relatable, which is very important because we will be controlling him for the rest of the game. Clever.

Each attack has excellent animation, sound design, and camera shakes. You can feel how impactful it is, really makes it fun to play.

I thought the game play is simple at first (which it still is in a good way), but there are things that add a little depth to it that I like.

The laser can destroy projectiles, so you can target them if you don't want to get shot.

One time helicopters were attacking me but the buildings are blocking my laser so I have to jump at them instead.

Finally, that climax thing where the background turns red and everything else turns black is done so well. Reminds me of that one scene in shin-Godzilla. Wish it would last longer or that more tanks would spawn for me to destroy during that time though :V

Great game, I had a fun time wrecking stuff!!

our goal was to make a simple, short and fun experience, many things could add depth but comments like this makes me think we did something right, at least ^^

thank you for playing

Awesome, reminds me of playing that war of the monsters game in 2d. Nice experience and i like how the monster's jump has real weight to it.

If the game is not loading, try Edge browser! It's a common problem with unity webGL

This is a super solid game. Great job! I love the visuals, the simplicity and the humorous cut scene!

The Itchio page really needs some love but the game is very, very cool. I love the animations and the small details and especially destroying stuff!

Thank you! We wanted to make destroying stuff as fun as possible.

Sorry for the page, we were in a bit of an hurry when we submitted the game. Anyways, we redecorated it, hope you like it now! 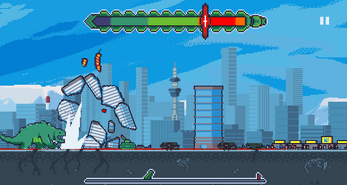 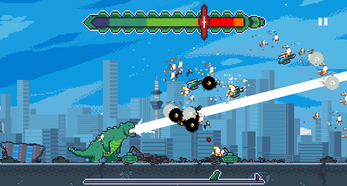 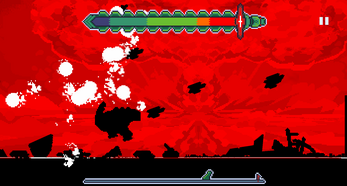